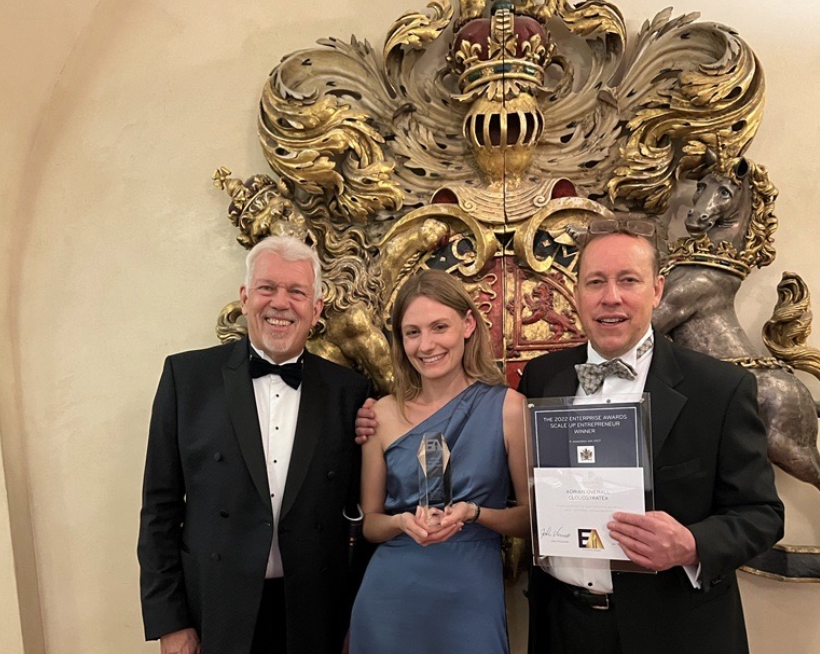 A disruptive IT advisory specialist that is committed to helping Enterprise organisations leverage next-generation IT services, has been acknowledged for its phenomenal growth after winning ‘Scale-up Entrepreneur of the Year’ at the annual Scale-up Enterprise Awards.

Established March 2019, CloudStratex is an outcome-focused firm, dedicated to the implementation of technologies and practices that enable Enterprise organisations to achieve operational efficiency, integration, and resilience through its own incubation and knowledge transfer techniques.

Since inception, the programme delivery and IT advisory specialist has established an innovative reputation for teaching businesses ‘to fish’ by showing them the value of self-sufficiency for continued growth and development.

Having secured an impressive portfolio of global Enterprise clients including MunichRE, LV= and The Ardonagh Group, CloudStratex is now on track to exceed a £20 million turnover by the close of its third year in business – marking a 112% revenue growth year-on-year, whilst increasing headcount to 150.

As a result, CEO, Adrian Overall, won the prestigious title of ‘Scale-up Entrepreneur of the Year’ at the 10thannual Scale-up Enterprise Awards – widely known as the ‘Oscars for Technology Entrepreneurs’ – which recognises the very best of the UK’s technology entrepreneurial talent, across eight different award categories.

Adrian Overall, CEO of CloudStratex, confirmed: “In just under three years, CloudStratex has grown from a desire to disrupt and transform the conventional IT consultancy model into a multi-million-pound organisation that has not only taught enterprise organisations to fish, but is also focused on driving the operational resilience, integration and efficiency space forwards.

This, of course, wouldn’t have been possible without the support of our hard-working and driven team, for which I am very grateful. I am incredibly proud of our achievements to date and to have won such a prestigious industry award.”

Throughout the evening, attendees also supported a charitable raffle for Healthright Ukraine Relief Fund, which resulted in a £30,000 donation to fund several emergency shelters for at least one month.

Headquartered in London, CloudStratex has already secured several industry accolades, including AWS partnership and ServiceNow ‘Premier Partner’ status in record time, together with a global award for ServiceNow Consulting.

Focused on developing the next generation of business technologists and leaders, the accelerating business has also developed its own Talent Academy, which offers funded technical and business professional qualifications and certifications, and now comprises of a growing team of 28.

Published in Cloud and Industry People