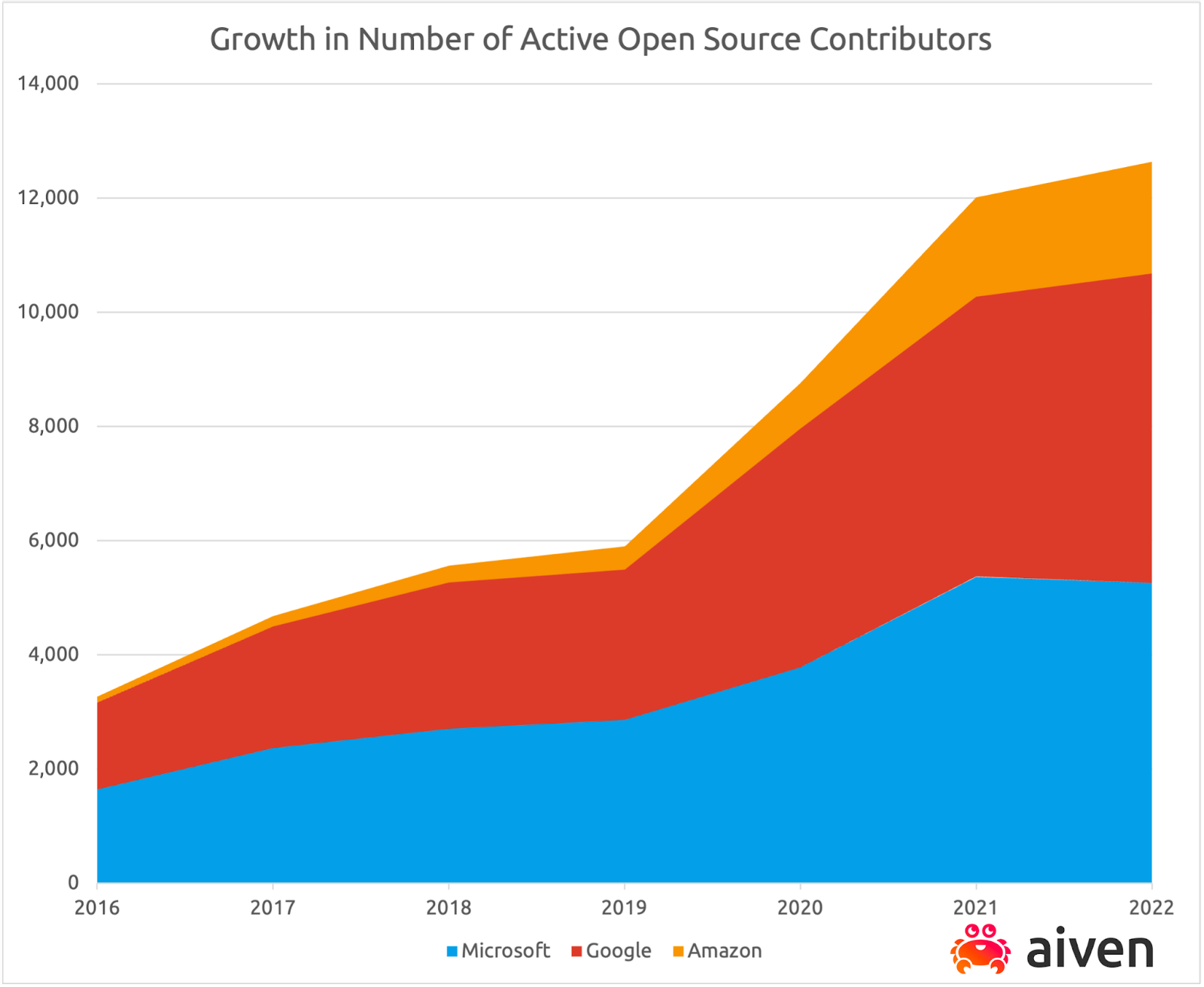 Aiven: Amazon, Microsoft, and Google are getting more employees involved in open source than ever before according to new analysis by Aiven, a software company that combines open source technologies with cloud infrastructure.

Aiven’s analysis of data from GitHub, the repository hosting service, which is the de facto home of open source, found the total number of active contributors to GitHub from Amazon, Microsoft, and Google has increased by 300% in six years – from 2,654 contributors in May 2016 to 10,549 in May 2022.

The research found that Google’s monthly commits to GitHub has surged 20% year-on-year and Google’s active contributors to GitHub (4,643) overtook Microsoft’s contributions (4,394) for the first time since records began in 2016.

Over a third of Microsoft’s OSS contributions are in programming languages that are maintained by Microsoft. 38.8% of languages it uses are either PowerShell or C# – both originally developed by Microsoft. Google on the other hand prefers C++ and Java, and Amazon contributes in Python and Java.

Delving deeper, Aiven’s research into commits – the submissions of new software patches to open source projects – has found that the number of commits to GitHub from Microsoft and Google is still behind its summer 2020 highs, although the difference between the two has dropped.

Amazon still lags behind its hyperscale competitors but is now backing large open source projects such as OpenSearch, a fork of ElasticSearch, and hosts a growing number of projects on its GitHub page (https://aws.github.io/ ).

Number of monthly commits from the big three:

Heikki Nousiainen, Field CTO and Co-founder at Aiven, commented: “Our research shows that the hyperscalers are contributing more resources to open source. This is great news. As a community, open source software needs this sort of commitment from big tech to ensure that important projects are maintained and that vulnerabilities such as Log4Shell don’t happen again. More than this, it’s a better way to write clean, transparent, secure code.

“An unexpected result of our research was seeing Google overtake Microsoft in terms of the number of its staff contributing to open source software. Google has championed open source since its early days and recently announced its Assured Open Source Software service, reaffirming that commitment.

“Google surpassing Microsoft is particularly surprising, as a factor in this has been a decline in Microsoft’s year-on-year commits to open source projects. However, Microsoft commitment to developer freedom and innovation is consistent, with the company  being a major player in open source,  and even purchasing GitHub in 2018. The switch is testament to the market increasingly looking to capitalise on open source software.

“Amazon continues to accelerate its commitment to OSS. OpenSearch, its fork of ElasticSearch in 2020, showed a major change of direction for the company as it showed it was willing to lead a major open source initiative.

“The overall message of the research is positive. There’s a huge amount of innovation continuing to happen in the open source community and the results benefit us all. The hyperscalers are setting an example for others to follow.”

Headquartered in Helsinki and with hubs in Berlin, Boston, Paris, Toronto, Sydney and Singapore, Aiven provides managed open source data technologies,  like PostgreSQL, Kafka, and M3, on all major clouds. Through Aiven, developers can do what they do best: create applications. Meanwhile, Aiven does what they do best; manage cloud data infrastructure. Aiven enables customers to drive business results from open source that trigger true transformations far beyond their own backyard. To learn more about Aiven, visit aiven.io