Working Together This month’s round-up of new distribution agreements

Distributor News Infinigate announces third acquisition in as many months

Cover story: Meet the 2Connect of the future 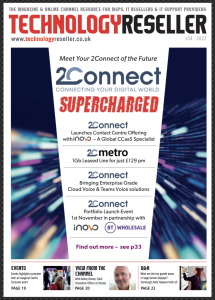 I couldn’t do my job without…: Josephine Liang picks her favourite work tools

Research: Print and the office of the future

My Life in IT: We ask Chris Ross, CRO at Barracuda Networks, about his life in IT

With the storm clouds gathering, it was heartening to read the latest ChannelWatch report from IT market intelligence company CONTEXT, which shows that IT resellers across much of Europe and beyond are still largely positive about the future. In its annual poll of more than 5,300 B2B and B2C resellers in Europe, Turkey and South Africa, 62% said they expected their business to perform better over the coming 12 months, only slightly down on last year’s figure (67%). Just 10% expect to do worse. These are pretty remarkable figures, especially when you consider that the survey was conducted in April to July, following Russia’s invasion of Ukraine and at a time when rising inflation and energy costs were hitting the headlines. Then I read the small print and saw that Europe meant France, Germany, Spain, Italy, Baltics, Nordics, Portugal and Poland, but not the UK. I wonder how UK responses might have changed the picture. Yes, Europe has its own problems, but I can’t help feeling that ours are greater, and were even before September 6 when Liz Truss became PM.

As a rule, IT resellers in the UK tend to have a positive outlook. One reason might simply be that they work in IT. According to a new survey by Experis, a leader in IT professional resourcing, more than one in four UK adults wish they worked in the tech sector. Many tech businesses will wish the same. The skills crisis came up in almost every conversation I had at last month’s Tech Live event, and it didn’t make any difference whether I was talking to a vendor, ISV, reseller or MSP. Everyone seems to be struggling with the same problem. In the IT sector, as Markus Rex explains in our feature on managed services on page 30, the skills shortage is being compounded by the rapid pace of technological change, which means there is a constant requirement to upskill and specialise. This is something of a double-edged sword for MSPs that benefit from demand from end users customers unable to recruit enough IT talent, but who require their own in-house expertise to meet that demand. Channel services organisations can help, as we explain on page 30, but what happens when they face the same problem? As ever, it comes back to education, education, education, with a great dollop of automation thrown into the mix.