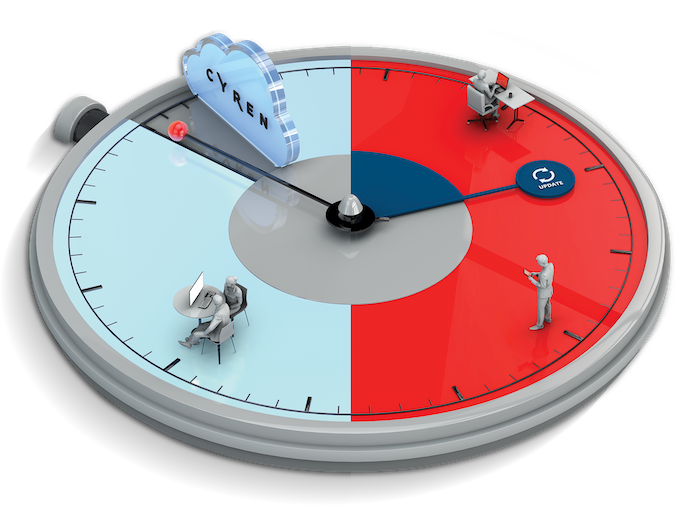 Cyren Inbox Security was a stand-out performer for Cyren in the first two quarters of 2021, reports James Goulding

Last year was a year of transition for Cyren as it continues to expand beyond its legacy OEM threat intelligence services business and develop security solutions for enterprises. In this context, a big highlight was the launch of a next generation, cloud-based email security product to help enterprise customers deal with the constant stream of phishing attacks and business email compromise attempts.

Cyren Inbox Security (CIS) is now a little over 12 months old and, with ARR approaching $1 million, following growth of more than 240% in Q2, it has achieved almost totemic status for a company that in the first half of 2021 experienced a 12.77% fall in revenue.

CIS might not yet be having a material impact on Cyren’s overall financial performance, but it does at least present the possibility of a substantial enterprise business growing up alongside the company’s existing threat intelligence services offering.

Cyren VP EMEA Matt Halsey points out that Cyren took the decision to build enterprise solutions as long ago as 2016 but says the transition has not been easy.

“Going to enterprises is obviously a different challenge for us. With our OEM business, it is very much a case of us and the large vendor – there is no channel involved, there are no partners and we have no visibility of end users. The challenge of taking our own products to market is having those support services and building a channel and building opportunities through that, which is a very different route to market for us. We had some email and Word gateway products that we had reasonable success with, but they didn’t do what we had hoped,” he said.

Halsey is much more confident about the prospects of CIS, which sits in the user’s inbox and detects and remediates threats, especially phishing emails, that have made it through email gateways and other perimeter defences.

“We call it inbox detection and response. We use sophisticated detection methods to look for imposter attacks, where someone’s email isn’t quite right but looks the same, and to look for ransomware and malware within email. But it is not just a question of detection; it is also about how you respond to the things that you find,” he said.

“The traditional email gateway is a perimeter defence; once the bad email has got through, it is in the inbox and the user will either understand it is bad and delete it or they will execute it. We provide protection across three pillars. We monitor the inbox 24 hours a day – that’s the detection part. Because we know things are going to get through, we also involve the user by offering the ability to scan an email there and then, by reporting and by integrating with various training companies. The final piece is remediation – once we see a bad email, we can very quickly remove it from all inboxes within an organisation. We rely on our detection, we rely on users’ awareness and then we are able to remediate and remove the threat.

“One of the beauties of our solution is that because we are effectively a Microsoft 365 snap-in, we integrate into Microsoft 365, we are not a separate product, we don’t have to be installed on endpoints. You can implement the solution in minutes across a large environment.”

The target market for CIS is organisations with 500 to 20,000 users, but Halsey points out that some customers have as few as 100 users. He adds that anyone that uses Microsoft 365 as a platform could benefit from this solution – and from future products as Cyren expands its offering into other parts of Microsoft 365, notably Teams.

“With the success of Microsoft 365, Teams is the natural place for us to go.  As I understand it, Teams is now being opened up so that you can connect to anyone, whereas before it was federated so you could only connect internally. If an organisation decides to open it up, attacks will become more valuable to bad actors. And the same with other communication methods, like Slack. That’s another area we are looking into,” he said.

Halsey says that the company’s 20 plus partners in the UK will have an enormous role to play in the roll-out of CIS, because of their relationships with end user organisations.

“There has been an explosion in the number of cyber-security vendors, which is OK if you are a large bank with thousands of IT staff, but completely overwhelming for an average organisation. Where traditionally a vendor would have reached out to customers themselves, that has become much harder to do because customers don’t have time to listen to all the vendors out there. Instead, they are talking to
their trusted partners and saying ‘Can you recommend three network encryption products because there are 150 out there and I only want to look at the ones you recommend’. That shift in power has taken place over the last few years.

“With that in mind, it was clear to me that we needed to put as much of our resource behind our channel partners – to be easy to deal with and to make those partners decent margin, which is clearly key, but also to give them something that was relevant and timely. I think we have got that with this inbox security solution.”

To find out more, please visit