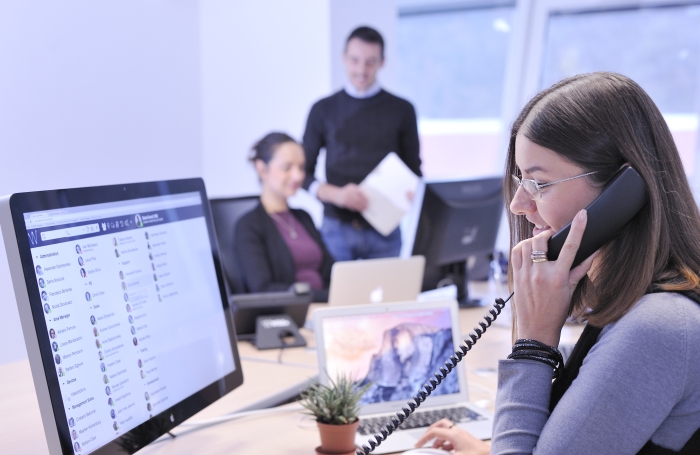 Doing it for themselves

Wildix, featured in Technology Reseller Issue 10, may be relatively unknown to UK resellers, but it is well established in several European countries, notably Italy, France and the Netherlands, and, following the opening of sales offices in the UK and US, is on target to achieve a turnover of $19 million this year, up from $14 million in 2017. To find out more about the fast growing developer of browser-based Unified Communications solutions and VoIP products, Technology Reseller visited Wildix’s R&D centre in Odessa, Ukraine, where co-founder and CTO Dimitri Osler and VoIP engineer Vasiliy Ganchev explained why Wildix is a leader in WebRTC.

Research and development lies at the heart of the Wildix success story, from its beginnings in Italy in 2005 and the development of its first PBX to the present day, when it continues to break new ground in the application of WebRTC technology, which gives users the ability to screenshare, make video calls, share files, chat and make voice calls via a web browser or mobile application.

In 2005, with cash generated from sales of SIP phones, Wildix founders Dimitri Osler and his brother Steve set up an R&D centre in Odessa to develop a VoIP PBX. Now spread over two ﬂoors in a modern office block in central Odessa, the facility employs 80 people and acts as a hub for Wildix developers in other parts of Ukraine, Belarus, Russia and Estonia.

The R&D centre is fundamental to the continued development of Wildix’s product portfolio, which consists of two elements: a VoIP PBX (available in hosted, virtualised and on-premise versions), which provides telephony and collaboration services, including chat, video calls, screensharing and file transfer; and a range of micro-services, like the Kite web chat, screensharing and collaboration feature, Ubicom videoconferencing, automatic speech recognition and speech to text conversion.

Unlike companies that choose to develop their offering through the acquisition of new technologies, Wildix prefers to create its own solutions – and has done so from the very start.

“In 2005, none of the networking vendors were doing anything new and while we saw a lot of solutions based on open source software, they were homemade and didn’t offer any guarantees to partners. That’s when we recognised the huge potential in the market,” explained Osler.

The potential was there, but the technology wasn’t, so the brothers had to develop what they needed themselves. “They were really hard times,” said Osler. “In the beginning the components we had to work with weren’t that good, so we had to write a lot of code to make everything work as we wanted it to.”

The commitment to innovation and self-sufficiency instilled in those early days continues to define Wildix’s approach today, which is to maintain an ongoing process of product development and enhancement. The R&D centre releases beta versions of new features to partners as often as once or twice a week, gathering feedback before delivering stable releases to end user customers every two to three months.

“The main advantage we offer over competitors is full integration of our products. We do everything in-house and we plan on acquiring teams that are efficient at creating good software. We don’t want to acquire ready solutions and somehow combine them with our offering. We believe in an eco-system of products that work together as one,” explained Osler.

WebRTC pioneer
This approach has enabled the company to stay at the forefront of developments in conferencing and communications, particularly in relation to WebRTC (web real time communications), the power at the heart of the Wildix PBX and a major attraction for businesses with mobile and ﬂexible working practices and a desire to improve productivity and agility through easy, effective conferencing.

WebRTC has a number of core benefits for end users:

It is integrated into web browsers (with the exception of Microsoft Edge), so users can access the full Wildix phone system simply by opening a browser and logging on, with no need to install software or plug-ins. This gives users the ability to take their phone system with them wherever they go – all they need is a browser or the Wildix smartphone app. With the option of a hosted version of the Wildix PBX, they don’t even need on-site hardware or handsets but can run everything through WebRTC. Wildix has clients with 300 or 400 users who choose to operate in this way; and

It is secure by design, with encryption of both signalling exchanges (connections) and media exchanges (voice and video). Wildix is a WebRTC pioneer. It started developing the technology in 2012, when it was frst implemented in browsers and has been active in improving WebRTC with Google and encouraging wider take-up, for example by helping Citrix add support of WebRTC to their infrastructure.

Today, large, established PBX manufacturers are making big investments in the technology, but VoIP engineer Vasiliy Ganchev is confident that Wildix can maintain a lead over its rivals, pointing out that Wildix’s hosted PBX is the first implementation of WebRTC in the cloud and that it provides customers with much more choice over the type of phone they can use.

“We are far ahead of other PBX vendors,” he said. “Some support a WebRTC phone, but that’s the only phone customers can use, whereas we provide a webphone, an Android phone and a desk phone, and customers can use whichever is most useful. That kind of implementation, with such broad functionality, is quite rare.”

Ganchev adds that Wildix WebRTC phones are also more versatile and reliable than those offered by other vendors.

“Some vendors might have some basic functionality: I call you, you answer and we speak, for example. But when I start video, you start video, you disable video or you make a transfer something usually breaks. To make a simple WebRTC phone is easy, but to make a WebRTC phone that works in all circumstances, with all other infrastructures, with all other devices and between different browsers is much harder. This we have already done,” he said.

Lean software development
In this context, another of Wildix’s strengths is its commitment to lean software development, which prioritises the rapid production of working code, with support for last minute changes, and close and daily co-operation between technical developers, business managers and QA teams.

“It would take Avaya much more time to make a product like we have,” said Ganchev. “When we develop something, the time between an idea and implementation is very short. We don’t have all the red tape that people have to go through in big companies. We are always open and always fast. Of course, Avaya can make something similar, but they have lost time and when they do implement it, we will have implemented a lot of new features we have in the pipeline.”

Osler adds that many of these make use of artificial intelligence, for which there is strong demand in the UK.

“When we entered the UK and US, we saw much more interest in advanced features relating to AI, like the ability to create a transcript of voice mail and call recordings and intelligent IVRs that let you dial by name – services similar to Siri and Amazon Echo. That is what we are working on now,” he said.

“AI is all about making things even easier for the user and automating things that currently must be done manually by users and customers.

LiveVoice IVR. This doesn’t have to be programmed in advance but uses artificial intelligence to respond to what the caller says. For example, if someone says ‘I want to speak to Mr Smith’, it could reply ‘There are two Smiths. Do you want to speak to John Smith or David Smith?’;

Text to speech. This speeds up the creation of IVR programmes by removing the need for someone to record options. Instead, you can just type in the text and the machine will generate the speech itself;

Voicemail transcription. Users can be sent an email containing a transcription of any voice mail, saving them from having to dial in to listen to a message and giving them the convenience of clicking a number to dial;

Personal Assistant. If someone is unavailable to take a call, this will tell the caller when they are due back in the office or when their meeting ends. In the future, Wildix plans to enhance the service by automatically notifying a caller as soon as someone becomes free.

Other developments in the pipeline are the ability to dial by name just by pressing a button and saying the person’s name and the Wildix Federation Project to establish a network of Wildix customers.

“The first application will be to give partners the possibility for their customers to contact them on a daily basis, with Presence and WebRTC features, such as call, video and chat, supported across the Federation,” explained Osler.

“Besides that, there will be complete federation with Kite (Wildix’s web chat feature). Right now, Kite is more about having a one-to-one session for a period of time, after which you close Kite and that’s it. In the future, there will be a process for creating a Kite account, which will enable you to get back to that user in the future, write a message and interact with them again. So, there will be federation between customers who bought a Wildix system and, through Kite, with customers who do not have a Wildix system.”

Expanded hardware options
In addition to enhanced communications services, Wildix is continuing to develop its hardware solutions, in part to meet continuing demand for handsets – according to UK Channel Manager Rob Loakes, sales of physical PBXs, handsets, headsets and conferencing systems still account for more than 50% of revenue – and in part to expand its range of conferencing systems into new areas.

Osler said: “Everything will be based on WebRTC, because it offers industry-grade security, which is something that’s not offered by legacy vendors.”

One solution singled out by him is the Ubicom Station, a plug and play conferencing system for locations of up to 200 square metres. A step-up from the Huddle conferencing solution launched earlier this year, this will compete with systems from the likes of Cisco and Polycom and be installable in minutes, not days; will be completely based on WebRTC; and will support up to three different displays.

Next year, Wildix plans to introduce an interactive whiteboard, which can be linked to units in other offices and automatically display what is being written on those devices.

Other developments highlighted by Osler include: the use of augmented reality and virtual reality to make videoconferences more immersive, in particular the use of VR headsets that give the impression that people in different locations are all sitting around the same table; the ability to control calls using gestures – “This could happen in the next two years,” he said; and, in Q3 this year, a solution similar to Slack and Microsoft Teams that will add more collaboration features, including the tagging of people within a chat conference.

One article can’t begin to describe all the possibilities offered by the Wildix PBX and associated micro-services. To find out more, contact the UK sales office or see the system in action at Channel Live 2018, taking place at the NEC Birmingham on September 11-12.