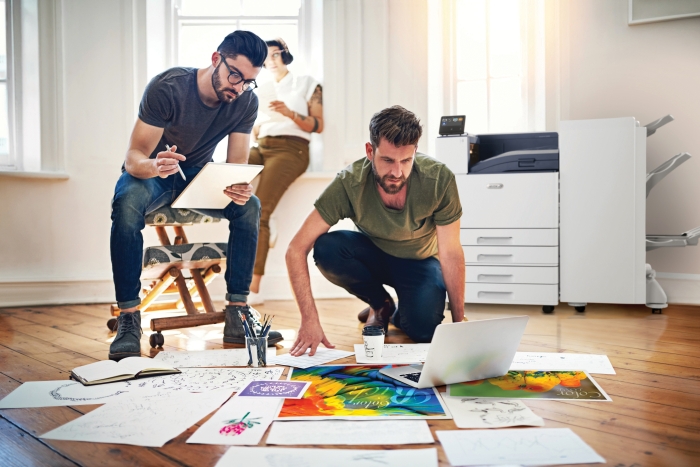 James Goulding finds out why Xerox’s expanding, ecommerce-enabled App Gallery is good news for the IT reseller channel, as well as copier dealers

At the end of last year, Xerox won the Keypoint Intelligence – Buyers Lab Document Imaging Software Line of the Year award for the fifth time, thanks in part to the strength of its app development programme and ecommerce enabled app marketplace.

With the Xerox App Gallery, Xerox is hoping to do for ConnectKey-enabled MFPs what the App Store did for iPhones, turning them into ‘workplace assistants’ in the same way that apps have turned smartphones into quasi ‘personal assistants’.

Today, there are 32 apps in the public gallery that users can install on Xerox devices, including workﬂow tools, connectors to popular cloud storage and enterprise applications (see overleaf) and productivity aids like translation and text-to-audio conversion apps.

The partner Gallery gives channel partners access to many more apps developed and marketed by Xerox and some of the 400 plus partners enrolled on the company’s Personal Application Builder (PAB) programme (PAB partners also develop customer-specific apps not for resale).

Xerox has made the PAB programme a key part of its growth strategy and is encouraging resellers to enrol in it and use associated tools like the Xerox Workﬂow Mapping tool to change their relationships with customers, differentiate themselves from competitors and generate additional revenue from software.

“When it came to solutions sales, we realised we had to change the paradigm,” explained Mark Boyt, Global Head of Solutions Marketing. “We had been launching a solution as if it was just another product – here’s the next thing, learn this, go and have this conversation with the customer. We decided we had to do a lot more to help partners sell software, to help them have the right conversations with customers in the first place. That’s how we came up with the Workﬂow Mapping Tool and the Easy Translator and Audio Documents apps.

“One of the things we have discovered is that you can try to have a conversation with a customer to identify a problem they need help with, but sometimes the customer is resistant and not ready to share. You have to build a relationship first before the conversation can get going. Things like Easy Translator can open doors and break down barriers because the customer just goes ‘Wow’.”

Once a door has been opened in this way, says Boyt, organisations are more likely to talk about ineffciencies they might have in their processes. A reseller can then propose an app-based solution, mapped out using the Workﬂow Mapping Tool and built with PAB tools, a process Xerox sums up in the slogan ‘Find it, Map it, App it’.

Food for thought
For a real-world example of this approach, Boyt cites the case of EtiQube, a Xerox concessionnaire based in Milan that has developed more than 30 apps for customers.

One of these is Meal-IT, a food ordering app that CEO Alberto Raimondi created following an on-site MFP audit. His contact invited him to lunch in the staff canteen, but every dish Raimondi selected was unavailable because he hadn’t ordered it before the deadline of 10am. The next day, he was determined to put his lunch order in on time. Along with hundreds of others, he joined a long queue at the only terminal for this purpose – which promptly broke down. Seizing the initiative, Raimondo pitched the idea of a meal ordering app that could be installed on 15 MFPs, saving employees queueing time and building resilience into the system.

“This example follows the ‘find it, map it, app it’ approach exactly,” said Boyt. “Raimondi found the problem – people weren’t eating lunch because they hadn’t ordered their food by 10 o’clock; he understood how it needed to work; he mapped it; and he built it.”

End user value
The ability to solve customer problems in this way has become a key revenue generator for PAB partners. In the last four years, JustTech, the first certified PAB app developer in the US, has installed 40,000 apps on Xerox ConnectKey MFPs, bringing in more than $1.2 million in licensing fees from other partners, and much more in sales to its own customer base.

“One example concerns a law firm that used to rotate contracts between Xerox and Konica Minolta. If a device needed service or supplies, paralegals would have to walk around with a notebook, write down the device location, write down the serial number, write down the fault code, go back to their desk, place the service call, and relay all that information. Now, with our Support Connect app, they just walk over to the device, press a button and all the service or supplies information is sent directly to the help desk. The firm sees such tremendous value in that efficiency that their last four contracts have not gone out to bid, but have come straight to us,” he said.

Another PAB partner that has seen its business transformed by apps is e-dox, based in Germany. At Xerox’s second European PAB Forum, held in the UK last November, e-dox Managing Director Marcus Putschli explained how the company had developed its first app after a customer announced it wasn’t going to renew its MFP contract and in the future would only require cheap desktop printers. The reason? The multifunctional capabilities of its MFPs were too complicated and required too many steps for the business process in question.

“I said ‘If there was a device where all these steps were rolled up and you only had to press three buttons would you lease it from us?’,” he explained. “They said they would. So we went away, developed the app and produced a proof of concept, after which they signed another five-year lease – not because of the machines, not because we were providing good service, but because we delivered a solution. That was four years ago, and now our company has completely changed. All from one instance where we failed to win business in the usual way.”

Based on that experience, e-dox has hired software developers and implemented agile software development processes, which it uses to create solutions for customers as well as for resale to other partners. Before Christmas, the company took this to the next level and started to offer its software development capabilities as a service to third parties.

Growing awareness
Boyt says that thanks to the work of Xerox and partners like those mentioned above awareness of the Xerox app platform is growing.

“We are not yet getting customers asking about the Workﬂow Mapping Tool and asking us to come in and optimise their processes – that’s one of the things we are looking to promote – but they are asking for apps. Everyone is used to putting apps onto their phone, which has become like their personal assistant, so the idea that your MFP can be your workplace assistant is resonating with customers,” he said.

In time, Boyt expects the Xerox App Gallery to become a significant revenue generator for many more partners, pointing out that if you sell a device for $500 but then produce 10 apps for which you charge $50 each per year, money from apps could soon overtake hardware revenue.

Perhaps more significantly, he suggests that Xerox’s ‘find it, map it, app it’ approach could lead to the development of solutions that have no link to MFPs, helping Xerox and its partners to evolve into broader based app and solutions developers.

“The interesting thing is that while the apps that make most sense to people initially are the ones closest to the box, the reality is that once you start finding problems and building apps to resolve them, you might find that a smartphone app is the right way to go. So, having the right mindset of ‘find it, map it, app it’ will help us move from a focus on building apps for MFPs to selling software and solutions whether they are connected to the box or not.”

The IT reseller channel
To date, most of Xerox’s efforts have been focused on training its own salespeople and the copier channel. However, with the expansion of the Xerox App Gallery, Boyt argues that the model has evolved to the point where it starts to make sense for IT resellers too.

“The IT channel sells lots of printers on a fast turnover basis. Their ability, or willingness, to invest time to ‘find it, map it, app it’ is not there – they have 10 minutes to complete a transaction and then move on to the next one. Now that we’ve got the e-commerce platform, it’s no different to the logic of the smartphone.

“When you buy a phone from O2 or Vodafone, they don’t spend a huge amount of time telling you about this app or that app; what they sell you is access to the app gallery where you will find all these great things that are going to solve your problems. What’s interesting for the IT reseller channel is the model where the value is the gallery and what they sell is the platform that gives customers access to that. We fit that model of a fast transaction that also offers the benefit of apps and solutions,” he said.