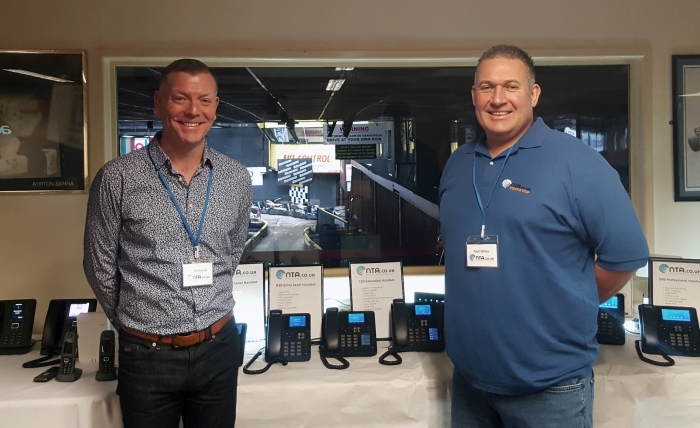 These are exciting times for NTA. The company, which launched its first hosted telephony product in 2005, is benefitting from a shift in how end user customers like to acquire products and from a reseller network that is expanding not just in numbers, but also in reach and capability.

“Whereas before we would see resellers with 2 or 3 sales people, we are now attracting partners with 8 or 10 sales people,” explained NTA Channel Sales Manager Justin Blaine.

“Today, we have 134 resellers across the UK, and we are adding an average of 4 or 5 a month. They are a real mixture. I would say 75%-80% are telecoms resellers; the others are managed service providers who are coming into the telecoms world.”

At the same time, there is growing demand from larger end-user customers.

“People’s mindset is changing. Instead of going from a PBX to IP-enabling the PBX with SIP trunks and then going to hosted, people are going from a PBX straight to hosted. Our sweet spot used to be up to 25 extensions, but as the mindset of customers has changed, we are seeing that move up to the 100s,” explained Blaine.

Add in the race to ISDN turn-off in 2025 and NTA, which has been enjoying respectable growth for the last few years, is readying itself for significantly higher growth in the future.

“When I joined NTA three and half years ago, our turnover was about £1 million. We did twice that this year, and next year I expect turnover to be nearer to £3 million,” said Blaine.

In spite of this growth, NTA is still relatively small in market terms, which, for Blaine, is one of its key strengths. “The advantage it gives us is greater flexibility in dealing with our resellers. If a reseller goes to a customer and they say I really like that wallboard, but I want that changed and this moved there, we could re-write it for them overnight,” he explained.

He added that it also helps partners to differentiate themselves in a crowded market. “Some of the resellers I speak to are sick to death of the fact that every time they go into a meeting there are three people in there with the same product. That’s when you get a race to the bottom.”

NTA started life as a traditional telephone system reseller. Then, in 2005, founder Paul White decided to develop his own hosted platform. Once this – and the connectivity needed – had reached a certain level of sophistication and maturity, he approached resellers with an offering based on a concurrency model.

Blaine points out that while resellers can still sell on a per seat basis, because of concurrency they are not paying a per seat cost. This gives them a big advantage over resellers that are charged by extension, enabling them to pitch their prices at a lower level and still make significant margin – as much as 80% gross profit, claims Blaine.

Another big selling point of NTA’s platform is that it is completely whitelabelled, so the end user customer only sees the reseller’s branding on the portal.

This extends to a new mobile app (see below) and a new four-strong range of unbranded handsets, which NTA can supply screen-printed with the reseller’s name and logo and programmed with the reseller’s own unique model number. This helps protect margin and avoid price erosion, as a Google search will lead straight back to the reseller’s website, rather than to another supplier offering the same handset for less.

Other benefits of the platform highlighted by Blaine include multitenanting, with everything managed via one portal; open APIs for easy integration; an in-house development team that can help connect bespoke applications; and a rich feature set.

Part of the rationale for NTA’s ‘karting and conferencing days’ was to introduce new features that it has been developing over the last 12-18 months. There’s not the space to go into too much detail here; suffice to say that they contribute to more user-friendly operation for end-users and easier management for resellers.

Examples of the former include a cloud directory so that users can use their handset to search for names and numbers and see who is calling; true hot desking so that when a user logs onto a phone, the system updates the BLF keys and extension number or name; videoconferencing and collaboration as a service; a smartphone app that enables users to toggle between WiFi and 3G/4G calls; and customer-level and NTA-level Disaster Recovery to ensure customers continue to receive inbound calls in the event of an outage.

Resellers benefit from a new provisioning server that allows them to copy settings to every phone on a customer’s network and modify individual settings via the portal, with no need to reboot the phone.

Further enhancements planned for later this year include using WebRTC to add video and presence to the NTA app and click-to-call functionality to websites; the introduction of an omni-channel contact centre featuring integration with Whatsapp, LinkedIn and Facebook; widget-driven wallboards; and true FCA/PCIDSS MiFID II call recording, with pricing based on a concurrency model.