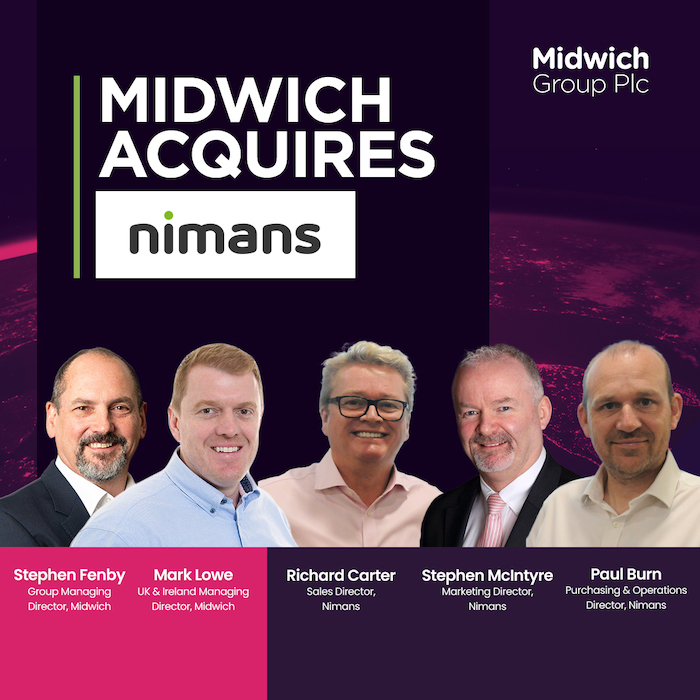 Midwich, a global specialist audio visual distributor to the trade market, is strengthening its growing UC offering with the acquisition of telecoms distributor Nimans Limited and its subsidiaries from Nycomm Holdings Limited. Completion, subject to FCA approval, is expected in the first half of 2022.

Nimans is a UK-based specialist distributor of unified communications, telecoms, collaboration and audio-visual technologies. Founded in 1981 and employing more than 200 people, it trades with over 2,500 telephony, IT and retail customers and in the year ending 31 December 2020 recorded consolidated revenues of £114.3 million and pre-tax profits of £5.8 million.

The aggregate consideration of £27.5 million will be paid in cash, with £16.5 million payable upon completion of the acquisition, followed by two fixed instalments of £5.5 million each after 12 and 24 months.

Stephen Fenby, Midwich Group Managing Director, said: “Nimans’ traditional telecoms market has been changing, bringing with it new revenue opportunities, which the company has developed strongly in areas such as unified communications, video conferencing, security and networking. I believe that the combined skill sets and capabilities of Midwich and Nimans bring a unique offering into the market in terms of providing complex solutions involving multiple technologies.”

Specialising in large format displays, projectors, digital signage, professional audio and UC, Midwich has relationships with over 600 vendors and a customer base of 20,000 mainly professional AV integrators and IT resellers.