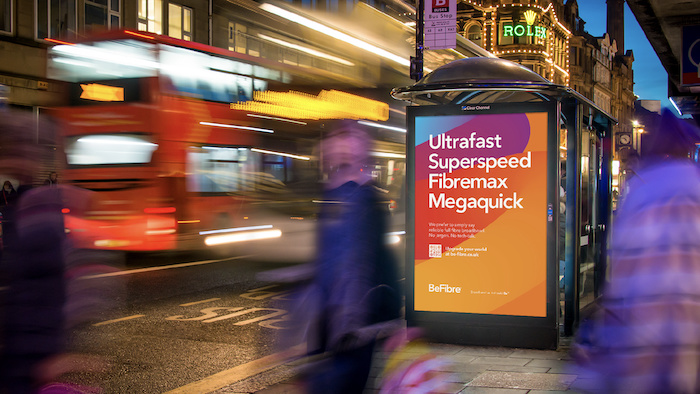 Broadband provider BeFibre has adopted a new visual identity and slogan – Broadband as it should be. Devised by integrated agency The Bigger Boat (TBB), the brand revamp combines a simplified logo and vibrant typography with a bold, straight-talking tone of voice, which it is now using across an array of creative assets including social and paid media adverts, direct mail, email and out-of-home (OOH) placements on vans, roadside banners and kiosks.

The gen on Gen

NortonLifeLock Inc. has changed its name to Gen Digital Inc. (Gen), following the completion of its merger with Avast. Gen’s family of cybersecurity and identity protection brands, including Norton, Avast, LifeLock, Avira, AVG, CCleaner and ReputationDefender, is trusted by more than 500 million users in 150 countries. Now trading on the NASDAQ Stock Exchange under the symbol GEN, instead of NLOK, Gen has dual headquarters in Tempe, Arizona and Prague, Czech Republic and teams in more than 150 countries.

Owl Labs, a Boston-based developer of AI-powered, 360-degree video conferencing solutions, has announced a new partnership with HP and $25 million of Series C investment, bringing its total funding to more than $47 million. The latest funding round was led by HP Tech Ventures, the venture capital arm of HP Inc. and supported by Owl Labs’ strategic partner in Japan, Sourcenext, as well as existing investors Matrix Partners, Spark Capital and Playground Global. Along with its investment, HP plans to deepen its commercial engagement with Owl, starting in France where local HP sales teams will launch Owl Labs products, including the Meeting Owl 3 all-in-one 360-degree camera, microphone and speaker, the Whiteboard Owl whiteboard camera and the Meeting HQ in-room computer and control centre for video meetings. The HP partnership and Series C funding round will enable Owl Labs to build on its existing global activities which include the recent appointment of Stuart Collingwood as General Manager of UK and Europe. OwlLabs.com

Manchester base for Workspace 365

Workspace 365, the Netherlands headquartered digital workspace platform, is entering the UK market with the opening of a British HQ at Spaces in central Manchester.

As well as saving time, Workspace 365 streamlines processes, simplifies document management and increases collaboration and engagement by improving communication via apps such as Yammer.

Erik Nicolai, CEO and Co-founder of Workspace 365, said: “With its thriving tech ecosystem and talent pool, Manchester was the natural location for our UK headquarters, and we’re excited to be a part of this great city.” Workspace365.net

More than half (55%) of business leaders in the UK plan to increase their software budgets in 2023, according to a new study by work operating system company Monday.com. This represents a slight increase on the 54% who increased their budgets in 2022.

Key priorities for 2023 are simplification, with 87% of UK-based IT decision-makers planning to explore ways of consolidating their software platforms in 2023 to improve efficiency and productivity.

Two thirds (65%) of UK respondents currently use four or more software tools every day for their work. Nearly one third say they could remove at least three tools from their tech stack without impacting productivity.

TechTalent, a tech training and recruitment specialist, has announced it will be creating 150 new tech jobs in the West Midlands through an end-to-end Attract, Train and Deploy model under which it handles the entire administrative process of recruiting and training individuals before placing them with businesses in the region.

Through its TechTalent Academy, the EdTech business already has a pool of specialists in cloud computing, cyber security, data science and software development that businesses in the West Midlands can call on for bespoke projects or long-term placements.

TechTalent CEO and Founder Janice Rae said: “Our Attract, Train and Deploy model allows us to adapt to meet the requirements of businesses across the region, providing them with the specialist tech talent they need to continue to grow.”

Tech specialists who gain roles through this new model will receive job-specific training in advance of their placement. Skills benchmarking at the outset will inform TechTalent what modules an individual should complete before deployment.

With offices in London, Birmingham and Bristol and a team of 40, TechTalent gives students the skills and certifications they need to kickstart a career in tech. It also works directly with organisations, offering skills benchmarking and training for existing team members through its immersive learning platform TechTalent Connect.

TechTalent recently signed the Armed Forces Covenant, signalling its commitment to support military veterans with the IT skills and contacts they need for a career in tech, including cybersecurity. www.techtalent.co.uk/businesssolutions/attract-train-deploy