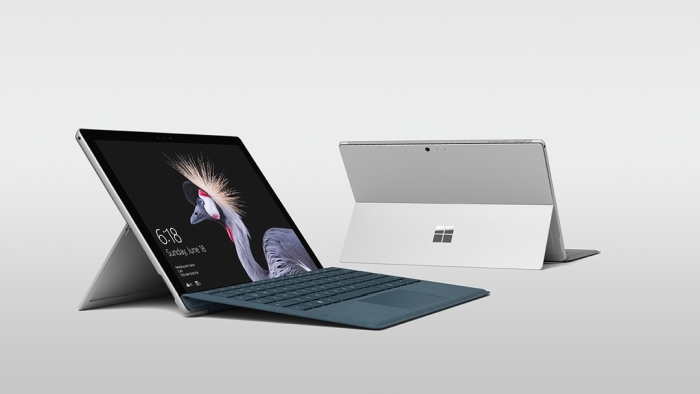 Staying in the flow

With its new devices, Microsoft is trying to make hardware disappear and ideas come to the fore

Highlights included the announcement of new Windows Surface devices and the roll-out of the Microsoft HoloLens self-contained holographic computer to 29 more countries.

New Surface devices for the UK market include the Surface Book 2 detachable notebook, the most powerful Surface yet, and a ‘blazingly fast’ LTE version of the Surface Pro due to be launched next month.

Greater product choice following the launch of Surface Laptop contributed to a 12% rise in Surface revenues in the quarter ending September 30, 2017. Microsoft will be hoping its new devices continue this trend, especially amongst business customers who are likely to welcome the extra power and longer battery life (up to 17 hours) of the Surface Book 2.

With a choice of operating mode (laptop, view and tablet) and input device including the Surface Pen and Surface Dial, the Surface Book 2 is nothing if not versatile. Add to that its high-speed Intel Core i5 or i7 processors, which let users run high performance software and take advantage of mixed reality using a headset and motion controller, and it is easy to see why Microsoft is excited by the new products.

The extra power of these devices and seamless switching between user interfaces hold out the promise of a fluid, high performance computing experience. With the roll-out of the Surface Pro with LTE Advanced, featuring download speeds of up to 450 Mbps and no-compromise battery life, business users can look forward to non-stop productivity when away from the office too.

Maintaining your flow
In a briefing with select UK journals, including Technology Reseller, Panos Panay, Microsoft Vice President for Surface, said that it was no longer sensible to talk about hardware and software separately. Describing hardware as a stage for the software, he said that Microsoft’s new products bring hardware and software together in a way that allows users to focus on their ideas rather than having to think about the device they are using.

He added: “Innovation is when devices disappear and ideas come to the fore”.

As an example, Panay referred to the broad choice of user inputs now supported by Windows, including keyboards and mice, touch and ink, gamepads and motion controllers, and natural human inputs such as gaze, voice and gestures, which, increasingly, users can move between seamlessly as they change working position or mode.

He specifically mentioned the Surface Pen, pointing out that users can now pick it up and start using it instantly, without having to select Pen mode on their device.

Mixed reality
Lorraine Bardeen, Microsoft General Manager for Windows and HoloLens Experiences, expanded on this theme in relation to mixed reality, which Microsoft sees as the next revolution in computing.

She said: “There are times when software and hardware come together. That’s what we’re seeing with HoloLens and mixed reality.”

Bardeen added that HoloLens is bringing the benefits of digitisation to a whole class of workers in manufacturing, service, retail and healthcare that to date has been poorly served by technology. “There are more than two billion people working in ‘first line’ work who need to use digital tools but can’t hold technology as it makes it difficult for them to do their jobs,” she said.

“HoloLens lets you solve workflows like remote service and remote experts in new ways. If a field worker encounters a problem that they can’t solve, they have to call in a field expert who might not be available for hours or days. Now, they can call in on HoloLens and the expert can see the problem through the engineer’s eyes; the expert can draw onto the screen and show how to solve a problem in minutes. This is out-of-the-box functionality with HoloLens.”

Another application is training and development. Instead of having to use manuals or visit computer labs away from their place of work, HoloLens lets ‘first line’ workers train on the equipment they have in front of them.

Panay added that the seamless computing experience facilitated by Microsoft’s new Surface devices and HoloLens is backed up by developments in AI and software like Windows Fall Creators Update that improve access to information.

“There is something very powerful about artificial intelligence that is happening right now,” he said, “The idea that data comes from the background to the foreground. Data is brought to me and formatted in such a way that I can consume it more easily. You can start reading analytics and data in such a different way now. It’s incredible. It’s a revolution.”

You can learn more about developments in Microsoft’s solutions and its vision of the future by watching the keynotes from Future Decoded through the following link: