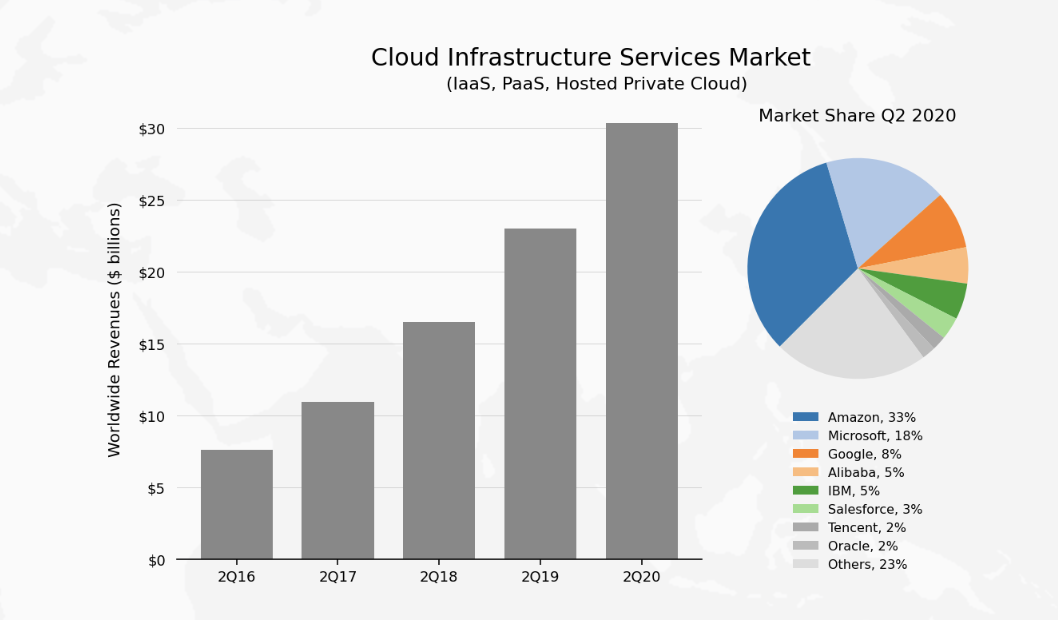 European cloud providers have been growing, but not at the same rate as demand, resulting in a significant fall in their share of the local market for IaaS, PaaS and Hosted Private Cloud, reveals new data from Synergy Research Group (SRG).

The European market has grown more than threefold since the beginning of 2017, to €5.9 billion in Q3 2020, yet European service providers’ share of it has fallen from 26% to less than 16%. Over the same period, the three leading global cloud providers – Amazon, Microsoft and Google – have increased their market share to 66%. Smaller US and Asian cloud providers that make up the balance are also steadily losing market share.

Synergy estimates that full-year 2020 European cloud infrastructure service revenues (including IaaS, PaaS and hosted private cloud services) rose by 31% to more than €23 billion in 2020. IaaS and PaaS services account for almost 80% of the market and are growing more rapidly than the smaller hosted or managed private cloud segment.

John Dinsdale, a Chief Analyst at Synergy Research Group, describes the attempt of European cloud providers to gain more traction in the market by focusing on customer segments and use cases that have stricter data sovereignty and privacy requirements as ‘laudable’ but likely to be as effective as King Canute’s attempts to stop an incoming tide.

He said: “The big three US cloud providers now have 67 hyperscale data centres in Europe and over 150 additional local points of presence, while the tier two US providers have another 36 major data centres. In total, their European capex over the last four quarters has totalled e12 billion, up 20% from the previous four quarters. European firms are facing a huge challenge if they want to break out of their niche-like positions – the revenue growth opportunities are massive but so too is the funding and willpower required to tap into those opportunities.”

Among European cloud providers, Deutsche Telekom is the leader, accounting for 2% of the market, followed by OVHcloud, Orange and a long list of national telcos and regional cloud and hosting specialists.