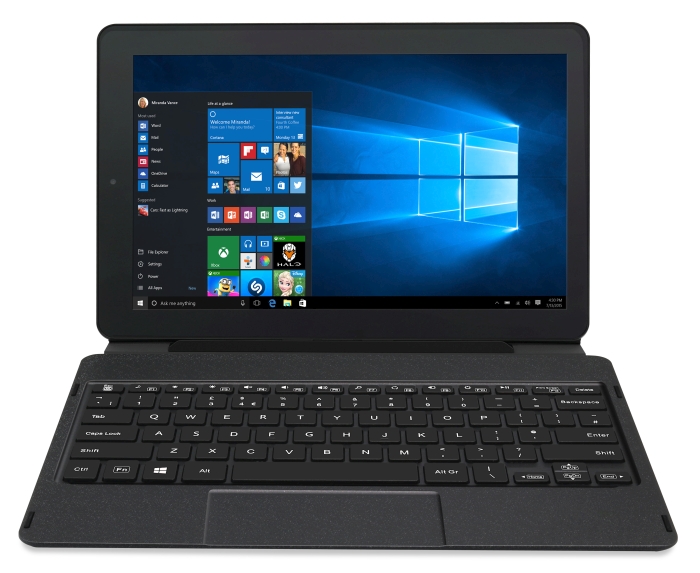 Venturer 2-in-1 notebooks are reviving a brand familiar to many older consumers. James Goulding reports

The Venturer brand is owned by Alco Electronics, a publicly listed company on the Hong King Stock Exchange, which celebrates its 50th anniversary next year. Alco has a long history in the consumer electronics business as a contract manufacturer – it was once the largest sub-contractor manufacturer for Sony’s Aiwa brand – and as a manufacturer of its own products.

In the UK, it produced TVs and audio products for the likes of Comet, Argos, Littlewoods and Currys, under retailers’ own brands and its own Venturer name. The latter gradually disappeared from UK shops in the ‘00s as Comet, its largest customer, went under and other retailers focused on their own brands.

When Adrian Green started working with Alco again (after leaving in 1999), the company was focused very much on the “I rejoined in 2015, and the business had changed from the TV field to the tablet field. In the US, we manufacture under the RCA brand, which we own for the North American market. We supply Walmart, Best Buy, Target, Home Shopping Network – all the major retailers in the US, which makes up about 95% of our business today. Turnover is $380 million.”

As healthy as Alco’s US business is – on Black Friday Walmart alone sold 1.75 million of the company’s devices – it realised that it was unwise to be so reliant on one country. So, in 2015, it took the decision to develop other markets outside the US, including the UK, France, Italy and China.

Green’s strategy in the UK has been to revive the Venturer brand by gradually building up awareness amongst parents in need of an affordable, but reliable computer for their children. The first Venturer 2-in-1s were launched in January 2016 and have been gaining traction ever since.

“We launched on Amazon, and every month we have been building up sales to the point where I have had meetings with Asda and Argos and am talking to Tesco. We have built the brand up in a structured, patient way,” explains Green.

He adds: “We’ve got a long way to go, but our reviews are good, we’re getting great publicity, we’re rebuilding the brand over here. We know we are the new kid on the block. But we feel there’s a gap in the market. You’ve got all the A brands which are going up in price, and there aren’t a lot of B or C brands after Asus Acer, HP and Lenovo. That’s the gap we want to fill.”

The company now has five 2-in-1 Windows devices in its portfolio, but Green’s plan is to expand the range with additional products later in the year.

“One advantage of having a big parent company with a large American business is that I can follow their product roadmap. We are talking about doing a HomeTab, a 17-inch tablet, which is like an all-in-one but portable so you can move it from kitchen to lounge to bedroom. It’s got a battery, USB ports and a nice big touchscreen, and will be Android-based because it’s an entertainment device. And we are looking at doing affordable laptops for Q3 and back to school. There are gaps in the market and retailers are looking for a second tier-brand that can work with them to build up that market – not everyone wants an HP or an Asus or an Acer.”

This year, Green is hoping to expand Venturer distribution beyond Amazon and Ideal World and get the brand into more Tier One and Tier Two retail stores like Argos, Currys, Tesco or Shop Direct and Maplins.

In this context, he cites the benefits of being backed by a profitable business with a commitment to manufacturing quality.

“We are a successful company and I’ve got a fantastic supply chain behind me, which is critical in this market. Last year a lot of companies couldn’t supply their commitments because they couldn’t get hold of LCDs. I’m fortunate to work for a company that buys LCDs in their millions; if I want 20,000 pieces, it’s not a big deal because we’ve already got the stock,” he says.

Alco’s UK distributor is also looking at the reseller market, though Green is not holding his breath. “That is a very brand driven market, so whilst we are talking to these guys, my expectations aren’t very high at the moment,” he says.

Venturer is having to compete in a tough market, but by focusing on quality rather than just price Green is confident that the brand will once again become a name to reckon with.