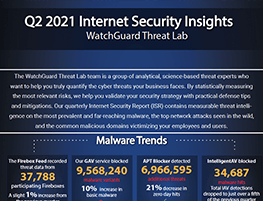 The latest quarterly Internet Security Report from the WatchGuard Threat Lab released today showsan astonishing 91.5% of malware arriving over HTTPS-encrypted connections during Q2 2021. This is a dramatic increase over the previous quarter and means that any organisation that isn’t examining encrypted HTTPS traffic at the perimeter is missing 9/10 of all malware. Researchers also found alarming surges across fileless malware threats, a dramatic growth in ransomware and a big increase in network attacks.

“With much of the world still firmly operating in a mobile or hybrid workforce model, the traditional network perimeter doesn’t always factor into the cybersecurity defence equation,” said Corey Nachreiner, chief security officer at WatchGuard. “While a strong perimeter defence is still an important part of a layered security approach, strong endpoint protection (EPP) and endpoint detection and response (EDR) is increasingly essential.”

WatchGuard’s quarterly research reports are based on anonymised Firebox Feed data from active WatchGuard Fireboxes whose owners have opted to share data in direct support of the Threat Lab’s research efforts. In Q2, WatchGuard blocked a total of more than 16.6 million malware variants (438 per device) and nearly 5.2 million network threats (137 per device). The full report includes details on additional malware and network trends from Q2 2021, an even deeper dive into threats detected at the endpoint during the first half of 2021, recommended security strategies and critical defence tips for businesses of all sizes and in any sector, and more.

WatchGuard® Technologies, Inc. is a global leader in network security, endpoint security, secure Wi-Fi, multi-factor authentication and network intelligence. The company’s award-winning products and services are trusted around the world by more than 18,000 security resellers and service providers to protect more than 250,000 customers. WatchGuard’s mission is to make enterprise-grade security accessible to companies of all types and sizes through simplicity, making WatchGuard an ideal solution for midmarket businesses and distributed enterprises. The company is headquartered in Seattle, Washington, with offices throughout North America, Europe, Asia Pacific, and Latin America. To learn more, visit WatchGuard.com.

For additional information, promotions and updates, follow WatchGuard on Twitter (@WatchGuard), on Facebook, or on the LinkedIn Company page. Also, visit our InfoSec blog, Secplicity, for real-time information about the latest threats and how to cope with them at www.secplicity.org. Subscribe to The 443 – Security Simplified podcast at Secplicity.org, or wherever you find your favourite podcasts.

WatchGuard is a registered trademark of WatchGuard Technologies, Inc. All other marks are property of their respective owners.