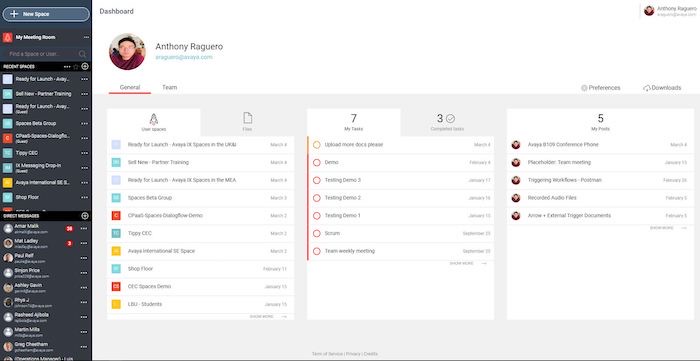 Steve Joyner, UK and Ireland Managing Director for Avaya, had the good taste not to use the coronavirus crisis to promote the company’s new cloud meeting and team collaboration app, even though it would have been uppermost in everyone’s minds as he outlined the benefits and applications of Avaya Spaces in an introductory webinar at the beginning of March.

Instead of highlighting how Avaya Spaces functionality, i.e. audio and video conferencing, group messaging, task management and file sharing, would keep self-isolaters productive and in the loop, Joyner cited the example of his A-level student daughter who was forced to take three weeks off from school after her appendix was removed. He pointed out that Avaya Spaces would have allowed her to keep up with her schoolwork, especially a music project involving real-time collaboration with four other students.

This example underlines two key attributes of Avaya Spaces – its simplicity and its universality. Pretty much anyone can find a use case for a shared collaboration space, whether in their personal or professional lives. The more so as all anyone needs to take part is an email address and a web browser to access the cloud-based service from any device.

From a business perspective, Avaya Spaces cuts across geographical and organisational boundaries, enabling it to be used for internal communications as well as for collaboration with external suppliers, customers and members of the public, backed up by integration with Google, Slack, Microsoft Office 365, Outlook and Teams. “You can create a space by clicking a new spaces icon and then invite anybody to join by sending the weblink by email.

You can upload files and start chatting and assign actions. If you see a colleague is online, you can start an unscheduled conference,” explained Avaya Consulting Sales Engineer Rob Carmichael.

Joyner added that users can create an unlimited number of spaces covering multiple teams or processes: “You could have a space for forecasts and a different space for HR issues or marketing. And everything that happens in that space is captured and kept. We don’t delete anything: if we are sharing documentation, if we are whiteboarding, it will remain in that space and every time someone comes back to that space in the future, everything will still be there,” he said.

More choice
Collaboration is not new ground for Avaya. Three years ago, it introduced Avaya Equinox, a unified communications and conferencing solution that it expects to see continued demand for, especially from enterprises with an ‘on-premises’ mindset and a requirement for advanced levels of security performance.

However, the launch of Avaya Spaces provides a completely cloud-based option that is as easy to use and accessible as the consumer tools people have become used to, whilst also offering enterpriselevel security, with at rest and in-transit encryption, GDPR built-in and the security of a service delivered from an EU-located Google data centre.

*Freemium – this allows anyone to sign up and use it free of charge for as long as they want. But there are limitations: users can upload a maximum of 1GB of content; audio conferencing is limited to 50 participants; and there is no video.

*Business – the first paid-for tariff provides the extra capacity and functionality that busines team leaders might require, including unlimited file sharing, conferencing with up to 200 voice participants and up to 200 video participants, with up to 15 on-screen at any time. Prices start at £3.73 per user, per month (volume discounts are available).

*Power – the premium tariff provides unlimited file storage and supports meetings with up to 500 voice, video and web participants, with up to 35 on-screen and the option of audio dial-in numbers. This costs from £11 per user, per month (volume discounts are available).

Work in progress
Avaya Spaces is not yet a complete collaboration solution – for example, multiple people can’t edit a document onscreen simultaneously – but Carmichael says that over time Avaya plans to add extra features to distance Avaya Spaces from consumer tools with the same basic functionality.

“One thing is transcription,” he said, “taking meeting notes and automatically adding them to the space; potentially also translation; automatically cutting out background noise; support for standards based video systems from Avaya, Polycom, Cisco etc. that companies may have already invested in; API integration to integrate Spaces into your workflows, e.g. CRM, to initiate a collaboration directly from the tools you use; blurred backgrounds; and bots and AI and assistants that help you be productive.”