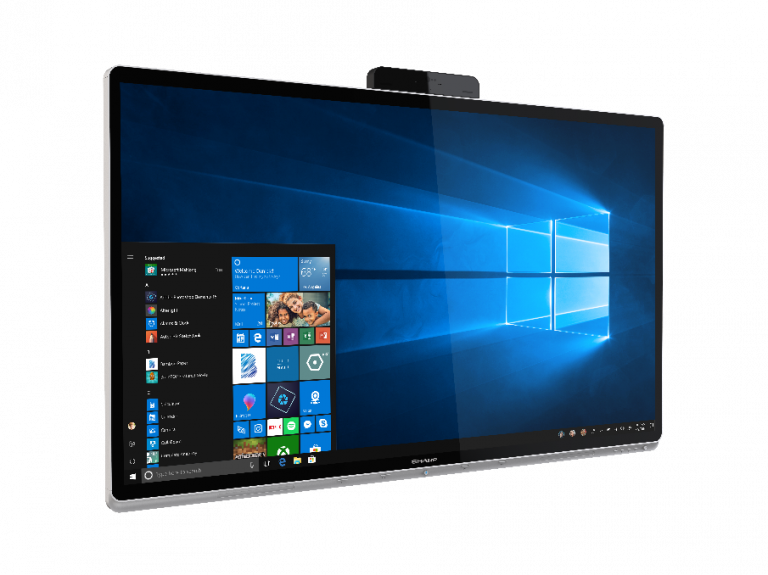 Microsoft has announced a new type of display for the modern workplace. Tayla Ansell reports

Microsoft recently announced a new category of display that like the company’s own Surface Hub is designed to support collaboration and team-working and maximise the benefits of the Microsoft 365 eco-system.

The first models, from Avocor and Sharp, are due out later this year. Because they depend on a connection to a Windows 10 PC, they are likely to be cheaper than standalone, all-in-one devices like the Microsoft Surface Hub.

Angela Evans, Microsoft 365 Lead at Microsoft UK, says that Microsoft is bringing out the displays in response to changing work styles.

“We are operating in a new world of work, where teamwork and collaboration are taking centre stage. In fact, our research has shown that we are now on twice as many teams as we were five years ago and so much of our time working together is spent in meetings. What this means is that businesses have to give careful thought to the meeting room technology they offer their employees,” she said.

Mark Mason, Avocor VP of Sales, EMEA, also highlights the shift from what he calls ‘me work’ to ‘we work’, where teams in the same office or multiple locations work together at the same time or asynchronously.

“Companies that promote this accelerating trend in collaborative working are five times as likely to be high-performing, which means they get more done together,” he said. “Windows collaboration displays by Avocor are the ideal way to enable teamwork and planned or spontaneous collaboration seamlessly in a huddle room, conference room or in any team space.”

The same could be said about any large, interactive display, so what’s so special about Windows collaboration displays?

For Evans, it’s their compatibility with Microsoft 365.

“What makes Windows collaboration displays unique is that they bring together the Modern Workplace and PC desktop experience, allowing users to make the most of Microsoft 365 apps and experiences at room scale. Users can be more productive because the collaboration display empowers them to connect with their own PC, which already has all the apps and content they need on it,” she said.

Jason Cort, director of product planning and marketing at Sharp Europe, also highlights easy access to the Microsoft tools users know and love, such as Office and Microsoft Teams.

He said: “If a display is easy to use, it gets used by everyone. And by working with Microsoft, we’re able to optimise the display to work with the powerful and familiar applications that millions of people use every day.”

Cort added: “We have all experienced meeting delays trying to connect with unfamiliar hardware, finding the right adaptors, fumbling with thumb drives to show a file, working out how the meeting room software works etc.. On average, it takes 12 minutes to start a meeting. The Windows collaboration display (WCD) addresses this challenge with plug-and-play functionality. Simply plug a laptop into the WCD (or wirelessly connect a tablet or smartphone) and users are connected with their own familiar software. Because the user’s own device is displayed on the WCD, all files, data and collaborative changes are at the user’s fingertips on the device.”

Another distinctive feature of the displays, says Avocor’s Mason, are built-in sensors that capture environmental and usage data that facilities managers can use to optimise their workspaces.

“That data can include what time meetings start; if they end early; peak utilisation times; room temperature; how many people attend a meeting; and many other things. All of this information can help managers make decisions about heating and cooling in particular areas and identify if rooms are under or over-utilised as meeting spaces, if a room is too large or small to serve typical meetings and requires modification, and many other drivers toward maximum ROI around facilities,” he said.

Angela Evans adds that by incorporating sensors that can connect to Azure IoT, Microsoft is making it easier for partners to develop solutions for customers.

“One growing area of opportunity for IoT is in smart buildings, to create greater efficiencies in energy use and to create environments that best fit an organisation’s culture. We’re building spatial intelligence capabilities in Azure IoT to democratise smart spaces for our partners. These features enable partners to focus on innovation at the application level, instead of spending considerable time on foundation and connective tissue that is invisible to their customers. The ability to query data in the context of a space, rather than from disparate sensors sets our partners up for building repeatable and scalable solutions, now and in the future,” she said.